If you’re planning on stepping into the backcountry, you’ll want to pack the essentials – and you may be surprised to know this includes a topographic map!

A topographic map allows you to visualize everything from the height and shape of the mountains to the depths of canyons.

It takes time and practice to learn how to read these types of maps, but it’s worth the effort.

Below, we’ll explain the basic features you’ll find on a topographic map, including the lines, numbers, symbols, colors, and so forth.

1. What is a topographic map?

A topographic map is a map that tells you the type of terrain in which you’ll be traveling.

It shows you the shape of the land…not just the distance you’ll need to walk or hike. 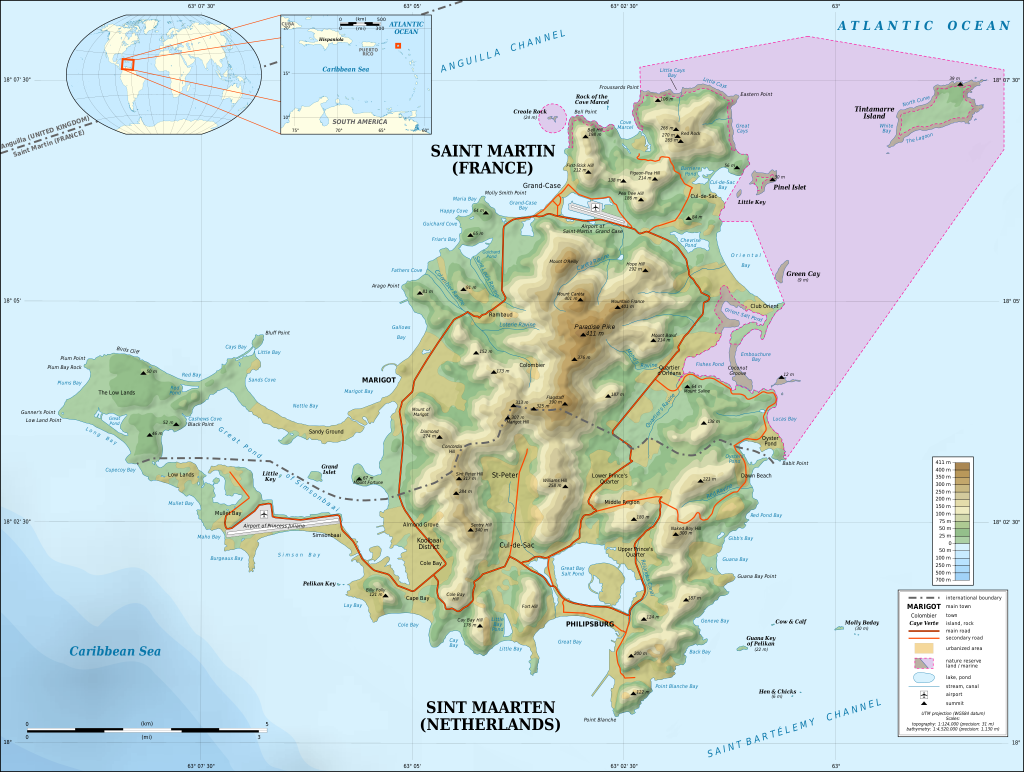 Understanding the scale of your map is one of the critical elements of reading it correctly.

It’s shown as a ratio.

The larger the second number, the smaller the scale.

When the scale is small, the less detailed the map is.

Plus, large-scale maps are easier to read than small-scale maps.

In the former, one inch equals about one mile.

In the latter, one inch equals about four miles.

3. How do contour lines describe terrain?

The feature of topographic maps that makes it possible to see the terrain is the contour line.

Contour lines indicate the steepness of the terrain and connect points that share the same elevation.

Where contour lines are close together (they never intersect), elevation is changing rapidly in short distances and the terrain is steep.

Where contour lines are wide apart, elevation is changing slowly, and it indicates a gentle slope.

Contour lines also indicate the shape of the terrain.

When you see roughly concentric circles, you’re seeing a peak.

Areas between peaks are passes.

These are contour lines that are thicker than average.

Along these lines, the exact elevation will be listed.

The contour interval — the change in elevation from one contour line to the next — is always the same within the map.

Most maps will have either a 40 or 80-foot contour interval, which means that each contour line is 40 to 80 vertical feet away from the next closest line.

You can find the contour interval for your topographic map in the legend.

Once in a while, a circle will indicate a depression rather than a peak.

These circles are often designated with tick marks.

You should see elevations decreasing as you get near the depression.

This exercise is intended to help you better understand contour lines.

The core steps are below:

Make a fist with your hand.

Look at the “features” on your first.

These features include four knobs (knuckles), a gentle slope (back of your hand), and four small ridges (fingers) separated by ravines (space between the fingers).

Using your other hand, mark an “x” on the knuckle that sticks up the highest to mark the “summit.”

Use a pen, drop down from the summit a quarter-inch, and make a contour line around the peak of “knuckle mountain.”

Follow the elevation around the mountain without dropping or climbing until the contour line is complete.

At this point, the circle should be closed.

Dropdown another quarter of an inch and repeat.

Do this again and again until you’ve mapped out your entire fist.

Next, lay your hand flat with your palm on the table.

Find the spread-out contour lines on the back of your hand, which indicate a gentle slope.

Notice the “v” shaped topo lines where the ravines were between your fingers.

The areas by your fingers have contour lines that are close together.

Locate an hourglass-shaped topo line for the saddle between your knuckles.

4. How do you identify features with contour lines?

Contour lines show more than just the steepness of a slope or the elevation of a peak.

They allow you to pick out major land features on the map by the way they are shaped.

Peaks and Summits: This is a mountain or hill that is marked by concentric contour lines.

The summit may be marked with a name, an “X,” or an elevation.

Valleys: A landform with a depression in which water, if present, will flow.

Valleys may also be called gullies, drainages, ravines, and couloirs.

They’re indicated by “V” or “U” shaped contour lines that “point” uphill toward higher elevation.

Ridges and Spurs: A landform with an elevated crest that slopes down the sides.

Ridges are also shown by “V” or “U” shaped contours.

However, these “point” downhill toward lower elevations.

Bowls: Contour lines will form a semicircle that rises from a low point.

Cliffs: Marked by extremely close contour lines, which indicate a sudden drop or rise in elevation. 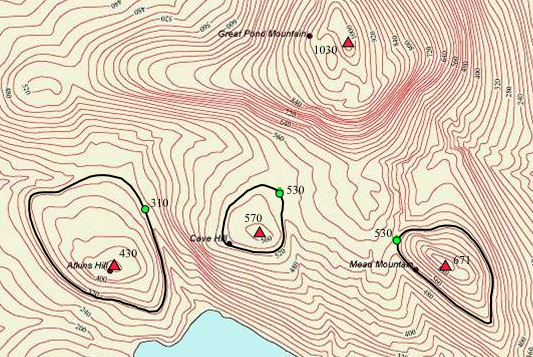 5. Where should you get topographic maps?

If you’re looking for a topographic map for your next trip, check out the sites below.

USGS Maps: The U.S. Geological Survey (USGS) was once the gold standard for topo maps.

Their maps cover the entire country, and you can find them in most outdoor stores.

However, paper maps are slowly being phased out and replaced by online resources that allow map data to be continually updated.

These maps may also have valuable features such as…

There are several websites that allow you to customize and download maps.

Some are free and others are subscription-based.

Local Maps: You may be able to get maps from public lands offices, such as national parks, national forests, state parks, recreational areas, etc.

They will produce maps to cover the land inside their boundaries.

Check their websites to see if they offer printed or downloaded topographic maps.

Often, they will produce these maps so their backcountry users can prepare for their trips.

6. How do you read steepness on a topographic map?

When the slope is gentle, the contour lines are spread far apart.

When the slope is steep, the contour lines will be packed closely together.

So for example, on a cliff, the contour lines will be stacked on top of each other.

In a meadow, where it’s flat, there won’t be any contour lines.

7. What do colors define on topographic maps?

Some legends define what different colors represent on the maps, so you should always look at the legend first.

However, if the legend doesn’t define colors, then you can generally follow the rule of thumb below.

Blue: Represents water in the form of creeks, rivers, and lakes

Green: Areas that are sections of land covered with tall vegetation, like trees

The absence of vegetation can mean a variety of things, including a desert landscape, a meadow, a scree field, a gentle grassy slope high above the tree line, or a burn area.

The contour lines can help you guess what the surface characteristics are of the ground without vegetation.

If the area is flat with no contour lines and a river flows through, then the white-shaded zone is likely a meadow.

However, if the non-vegetated area is high above the tree line, steep, and below a rocky mountain, then there is a good chance it’s a field of talus.

A topographic map won’t ever tell you exactly what the terrain looks like, but it can give you enough context clues to put together an idea.

Your compass, needle, on the other hand, is drawn to magnetic north.

Declination is the angle of deviation between magnetic north and the true north.

You’ll likely see this angle depicted at the bottom margin of the map or on the map itself.

Maps and compass navigators use the declination angle to adjust their compass to account for the difference between true north on the map and magnetic north.

Declination depiction matters on topographic maps because it varies with the location on Earth.

In one part of the U.S., it may be several degrees different than in another part of the country.

Declination will also change over time as magnetic north responds to the Earth’s ever-changing magnetic field.

As a result, it’s important to check the map’s publish date because older maps are often less accurate.

9. What should you know about map grids?

Many topographic maps have grid lines with the numbers 1-36 written in the middle of each box.

These numbered boxes are called sections.

They originate from the township and range survey method that was previously used throughout the western U.S. and some midwestern states as well as Alabama and Florida.

Each square on the map represents one square mile on the ground.

So, if you see a map grid, you’ll be able to assess distance without having to use the distance bar.

10. What other topographic map tips should you keep in mind?

If you’re a new topographic map user, you should consider these tips.

They can help you acclimate to using the maps and understanding their details.

Your map legend is a useful part of the map that you shouldn’t overlook.

To familiarize yourself with the map legend, start by studying what each line, symbol, and color means.

This way, you don’t have to constantly refer back to the legend when you’re looking at the map.

Naturally, streams and lakes are most often depicted in blue.

The legend will also show key data including the map’s scale, contour and index-line intervals, grid systems, and magnetic declination.

These are used for more advanced navigation.

Visualize how the terrain at a major landmark relates to the contour lines on your map.

This process may include…

Hone your map-reading skills on every trip

When you’re on the trailhead, pull out your map, orient it correctly, and mentally check off landmarks as you hike.

This will help you to understand the map and avoid getting lost.

Understanding how to read a topographic map is a great skill to have — especially if you’re planning to hike in the backcountry or live off-grid.

Use the tips above to help you learn how to master these maps.

While it’ll take some practice, it’s well worth it to have this ability in your back pocket.

If you are looking to buy affordable land, you can check out our Listings page.

And before you buy land, make sure you check out Gokce Land Due Diligence Program.

If you are looking to sell land, visit our page on how to Sell Your Land.

Would you like to receive an email with our latest blog/properties every Thursday?

I hope you enjoy reading this post. If you are interested in buying or selling land, check out:
Get An Offer For Your Land    Buy $1 Down Land    Master Land Due Diligence

I hope you enjoy reading this post. Don't forget to check out my new book: Land Investing Mistakes -Erika

Disclaimer: we are not lawyers, accountants or financial advisors and the information in this article is for informational purposes only. This article is based on our own research and experience and we do our best to keep it accurate and up-to-date, but it may contain errors. Please be sure to consult a legal or financial professional before making any investment decisions.

Prior to starting Gokce Capital, Erika received a Bachelor of Architecture from the University of Southern California and a graduate degree in Urban Policy from Columbia University. She worked as both an architectural designer and engineer in New York before joining the New York City Department of Housing Preservation and Development.

Erika currently lives in the New York Metropolitan area with her spouse, daughter and cat. She is originally from Chicago and still considers herself a midwesterner at heart.

Erika also loves to read, write and travel (fun fact, she has visited all 50 states and more than 30 countries!). Her new book, Land Investing Mistakes: 11 True Stories You Need To Know Before Buying Land, is now available on Amazon.

Latest posts by Erika (see all)